The TCU College of Fine Arts is committed to offering diversity, equity and inclusion events, programming and curriculum for TCU students, faculty and audiences across North Texas.

Below are some of the initiatives successfully funded by the Arts Programming & Diversity, Equity & Inclusion Initiative Programming Grants.

The SCCDance hosted guest artists from Kinetic Light, a disability dance company, to work with students and faculty on the importance of bringing accessibility and equity to the world of dance. Susan Douglas Roberts, Professor of Dance, coordinated Kinetic Light artists to engage through multiple courses, ranging from choreography to dance lighting design. Kinetic Light founder Alice Sheppard was also invited to reach the broader TCU community through “On and Beyond the Stage: Practicing Disability, Access, Aesthetic & Teach,” a virtual discussion on the disability arts movement. Read the grant application. Alice Sheppard and Laurel Lawson fly through a cloudless blue sky with arms outstretched and
their wheelchair wheels spinning. Alice is a multiracial Black woman with short curly purple and orange hair; Laurel is a pale white person with very short cropped teal hair. You don’t see the ground, only sky. They both wear metallic silver and gold, and Laurel has a wide, peaceful smile. Photo by Safety Third Productions, Shimmy Boyle Alice Sheppard, a light-skinned multiracial Black woman with short curly hair, suspends majestically from the ceiling; one arm clasped to a cable that hooks onto her wheelchair, and another outstretched straight down towards the floor. Jerron Herman, a medium-height dark-skinned Black man with a beard and kinky high top black hair, jumps up towards Alice’s outstretched hand. He is looking directly up at her and his right and is just shy of meeting hers. His palsied left arm clings to his chest. Silver barbed wire cascades all around Jerron’s body, encircling him in a sculptural framework. Photo by Grace Kathryn Landefeld, courtesy Jacob’s Pillow. 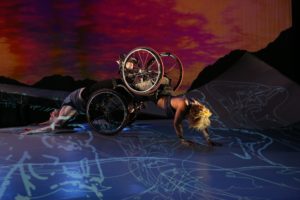 Alice, a multiracial Black woman with short curly golden hair, wearing a sleeveless tank top, is crawling on her forearms with her knees in Laurel’s footplate. Laurel, a pale white woman also wearing a sleeveless top, is arching her back on the ground as she is dragged along the floor. Their wheelchair wheels are stacked and shine in the light. The sky in the background is full of deep red and orange sunset hues; blue and white projections of figures and constellations fall across the ramp and the floor. Photo by Chris Cameron, courtesy MANCC.

The Sh’ma Project is an educational, artistic movement against hate. The Sh’ma Project weaves education, performance, interpretive workshops and audience engagement into a cohesive whole. Combining dance/theater with film projections, Sh’ma tells one family’s story of the Holocaust in 90 minutes, featuring 15-20 performers. The protagonist, based on the director’s mother as a Budapest schoolgirl, travels from familiarity to deportation, concentration camp to refugee camp, stateless teen to immigrant. Starting in DFW and expanding to other cities in Texas, the project will bring performances and workshops to university and high school audiences, giving young people personal narratives that build understanding in ways that traditional history lessons cannot. Many students have not had the opportunity to creatively process information about the Holocaust, racism, ethnic cleansing and other identity-based atrocities. Student groups participating in pre- and post-performance “Upstander Workshops” will be guided to interpret the difficult content in empowering and creative ways to contextualize history and make contemporary connections. Through dialogue, personalization and expressive movement, audience participants will create collaborative responses to their shared experience. The goal of the Sh’ma Project is to create a safe space for young people to learn about the Holocaust and to converse, explore, identify and ultimately reject hate speech and behaviors that lead to atrocities and genocide. Read the grant application. The Art Galleries at TCU presented Caribbean Fantasia, an exhibition by French artist Raphaël Barontini, which explored issues of representation and race through the re-presentation of historic imagery. Barontini’s new work for the exhibition included custom clothing designed in collaboration with the National Multicultural Western Heritage Museum and Hall of Fame. As a tribute to those who have been erased from history, these pieces were worn by cowboys of color in a parade to mark the opening of the exhibition. Read the grant application. Dr. William Gibbons and Dr. Gina Bombola invited Dr. Naomi André, the world’s leading expert on race in opera and the author of Black Opera: History, Power, Engagement, to be the keynote speaker at the Opera and Popular Culture After 1900 conference. Music academics and TCU music students heard from Dr. André about the important topics of race and identity in contemporary music and engaged in discussion about the role of the arts in the issues of equity and inclusion. Read the grant application. View the conference program.

Associate professor Murrell Horton invited Jerrilyn Lanier to present the workshop “Bridging the Gap”, which addresses the hair and makeup obstacles performers of color face in the entertainment industry. In addition to the workshop, Theatre students worked with Lanier on the hair and makeup designs that were later seen in Theatre TCU’s production of Sister Act. Read the grant application. Dr. Jon Burgess brought Japanese trumpet artist Kana Madarame to TCU to present a masterclass and concert. Madarame is the founder of Project KANA, which aims to build bridges between different cultures. In addition to working with TCU music students and DFW-area high school students during the masterclass, Madarame’s concert presentation centered on communicating the Japanese culture and spirit through music. Read the grant application. As part of the Latin American Music Festival, Dr. Jon Burgess invited world renowned trumpet soloist Pacho Flores to lead the TCU Trumpet Day masterclass. Flores, who got his start in the groundbreaking Venezuelan System of Youth and Children Orchestras (El Sistema), shared with attendees his story—from humble beginnings to a successful professional recording artist who has performed around the world. TCU trumpet students and other brass players in the DFW metroplex also enjoyed an opportunity to perform for and interact with Flores, who shared feedback with the instrumentalists. Read the grant application.

Behind the scenes of Pacho Flores’ visit to TCU

Following a TCU School of Music study on diversity of programming, works by female composers of color were identified as an underrepresented area. Dr. James D. Rodriguez and colleagues organized a recital of works by prominent Black female composers, including Florence Price, Errolyn Wallen and Tania Leon, for students in the School of Music, Women & Gender Studies and African American and Africana Studies. Read the grant application. Additional funding may be available for faculty, staff, and student projects through the Office of Diversity and Inclusion’s Inclusive Excellence Fund.